First, given that politics is one of those super touchy subjects, I want to state that this post is entirely party-free. This is not about one politician over another, this is about a thought experiment.

About a month ago, after seeing the 500th post about how such-and-such candidate did some horrible thing (gasp!) I began to wonder. Now, ever since i first became aware of how American politics is supposed to work a decade and a half ago I have been appalled at the system. My young, naive, optimistic little self could hardly believe that a country such as I had been raised to believe we had ran on a system of choosing the lesser of two evils (a concept that I found entirely unacceptable).

Not choosing between which candidate was best for our country, but which candidate was least bad. Then, on top of that, I learned some of the underhanded methods that people use to make sure their party has the best chance of winning. They would deliberately go and vote in the other party’s primaries on hopes of electing a weaker candidate. This, to me, seemed a lot like we’d all agreed to poison the pie of our competitor (while knowing they’re poisoning ours) in the hopes that our pie will win the ribbon because the only pie we’re competing against is one that wasn’t doctored to make the judges puke. This, unfortunately, means that our pie is pretty awful, too.  So, rather than judging between two beautiful, wonderful, best-in-state pies, we’re forced to choose between two lesser pies.

Now, this doesn’t seem too bad the first year. Or maybe the second. But after 20 years of judges lowering their prize standards and competitors raising the lengths at which they will go to win (to the point that they’re less focused on making a good pie than they are on disqualifying all the competition), you’re stuck with a couple pies so bad that you’d rather try a cow pie than award a ribbon to either contestant.

Which brings us to where we are today. Let’s face it, both candidate’s strongest argument to vote for them is that they’re not the competition. (Eat my pie, it doesn’t have a deadly dose of arsenic in every bite like his vs. Eat my pie, it’s not made of radioactive waste like that one!)  But this isn’t about the candidates.  This is about their supporters, and not the athletic kind.

It seems that no matter the stories told, the mud and feces smeared across your facebook page, or the truly incredible things they say, each still has die-hard voters, and those voters, when asked, say they same thing. “They’re not [the competition]. If you don’t vote for [my candidate] it equals a vote for [the other candidate].” and various other forms of manipulation and fear-mongering.

But, what I really wanted to know, what I really wondered, was at what point do these voters draw the line? Y Candidate is accused of terrible acts 1,2 & 3, Z Candidate has terrible traits a, b & c.  Obviously, with this race as decisive as it is, and the voters so deeply frightened of giving their votes to [opposing candidate]” that no matter what their candidate did, they would NEVER vote for the competition.

But there is another option. There are, in fact, 3rd party candidates. “But you’re throwing your vote away!” so many cry. Well, there’s the option to simply not vote, as well.

My question became this: At what point would you be willing to either vote 3rd party or not vote at all? What would your pet candidate have to do to make you so disgusted that you just couldn’t do it? How far could they stoop before your personal morals and convictions simply would not allow you to live with yourself if you voted for them, forcing you to either vote 3rd party or not at all?

I asked this of my facebook friends, and the answer I got was shocking.

The defended their candidate, saying that nothing has been proven, at least their not [opposing candidate], they said why voting 3rd party was a waste, they preached, they even asked their friends and family and got the same responses.

I dug a little further. What if the proof were undeniable that [candidate] did something illegal and you knew it and had irrefutable proof, but wasn’t convicted of it? My responder complained about conspiracies and felt they were being interrogated.

As for the “unstable” responder, I cheered at getting a solid response, but when I questioned if there were actual actions or accusations that would change that responder’s opinion, and all I got were crickets.

Why is it, do you suppose, that people are so deeply loyal to their parties?

I would ask why people buy in to this fear-mongering policy, but I understand the concept that they’re afraid, deeply afraid, of what it will mean to them if the other candidate wins. So afraid, that they are willing to exchange almost anything to avoid that fear.

Why is it that the things that would disqualify any one of us for a decent, honest job, or land us in jail, or make us shunned from polite society if it were known, are things that we’re totally willing to tolerate and overlook in the people we’re allowing to fight over the rule of our country?

I don’t know about you, but I may have watched too much Star Trek: I’m done with accepting the no-win situation. Being allowed to pick my poison is not acceptable. I choose neither. 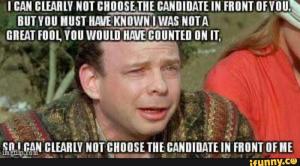